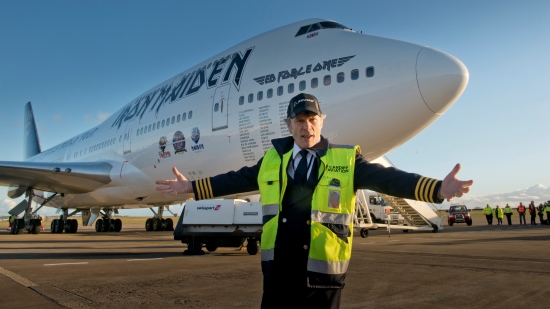 Everyone knows celebrities like to fly in style, chartering private jets to ferry them around the world, but there are also celebrities who can fly themselves instead.

Everyone knows celebrities like to fly in style, chartering private jets to ferry them around the world, but there are also celebrities who can fly themselves instead.

Probably one of the best known celebrity pilots, Travolta owns five aircraft in total and lives on a private estate called Jumbolair, which is located within Greystone Airport. This means that all the residents can simply land and taxi to their driveway. Travolta has the largest plane on the block, with an ex-Qantas Boeing 707 which he parks up right outside his house.

Travolta gained his pilot’s license early in his career at the tender age of 22, and started in smaller turboprops and light jets before moving on to the larger aircraft. Due to his commercial licence and ownership of a 707 he was also able to fly large amounts of aid including doctors and supplies into Haiti after the earthquake in 2010.

The frontman of legendary rock band Iron Maiden, Bruce has always been in love with aviation. He holds both a private licence and a commercial licence, and was a pilot for the new defunct Astraeus airline. During this time he was involved in a number of high-profile humanitarian flights as well as flying football teams.

More recently he started Cardiff Aviation, an aircraft maintenance business, for whom he recently flew the first commercial flight for the newly relaunched Air Dijbouti. He has also flown Iron Maiden around during their world tours. The first incarnation of the now iconic Ed Force One, was a Boeing 757 and the latest, a Boeing 747.

Ford’s interest in aviation started a long time ago, with the actor taking lessons back in the 1960’s, until a lack of money called a premature end to his time in the sky. 50 years later and he holds both a private pilot and helicopter licence and was also the Chairman of the Experimental Aircraft Association's Young Eagles program for five years.

Ford owns a range of aircraft, including a Ryan PT-22A and a Cessna Citation Sovereign, but it has been his helicopter, a Bell 407 which has seen the most press. With it he’s rescued two lost hikers who got into trouble near his ranch in Wyoming, which occurred during his time as a part of the Teton County Search and Rescue Team.

Freeman had wanted to get into aviation from a young age, and turned down a partial drama scholarship to instead enlist in the United States Air Force. Here, he served as an Automatic Tracking Radio Repairman, for four years, climbing up the ranks to Airman 1st Class. Having served, he then turned back to acting, moving to Los Angeles.

Once his career in acting kicked off, he was finally able to afford flying lessons, gaining his pilot’s licence as the age of 65. He has owned three aircraft, a Cessna 414, a Cessna Citation, and his most recent purchase, a SyberJet SJ30. At the age of 78 he’s still flying, but is often more likely delegating the flying to someone else whilst he relaxes.

It’s said Jolie was first inspired to take to the skies by adopted son Maddox, who was obsessed with aircraft at a young age. After a slew of lessons, she gained her private pilot’s licence in 2004 and has been flying regularly ever since. She is most often seen flying small turboprop aircraft including the Cirrus SR22 and Cessna 208 Grand Caravan which she owns.

Her equally famous ex-husband, Brad Pitt, also has a private pilot’s licence which he got after becoming fascinated with vintage planes. He now owns a World War II-era Supermarine Spitfire for which he had to get a special certificate to fly. And son Maddox, who started it all, has reportedly also had flying lessons, though is currently not old enough to apply for his licence.

Whilst many know Tom Cruise’s ‘Maverick’ from Top Gun is a skilled pilot, many don’t know that the actor himself is also fully qualified to handle an aircraft. He’s held a pilot licence since 1994 after being inspired whilst filming various scenes in Top Gun, many of which took place in the backseat of an F-14A Tomcat, whilst it was mid-air.

He now owns over five jets, including a Gulfstream IV, which is said to have a Jacuzzi on board. Another of his past favourites is a P-51 Mustang which is an American single-seat fighter from World War II. He has also started to take helicopter lessons, and was spotted in Battersea, London hopping into the cockpit of a Eurocopter AS350.