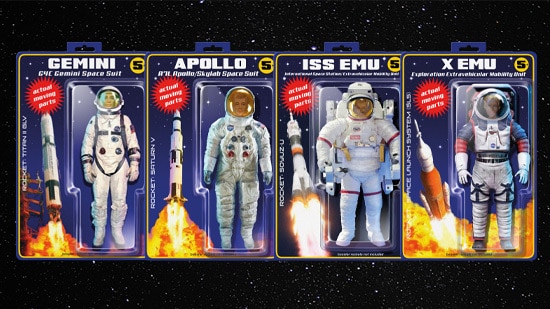 How the evolution of the spacesuit aims to take humanity to the moon and, perhaps, even further…

Have spacesuit, will travel

How the evolution of the spacesuit aims to take humanity to the moon and, perhaps, even further…

This year marks the 60th anniversary of Alan Shepard’s historic spaceflight which saw him become the first American in space, just a few weeks after the Soviet Union’s Yuri Gagarin beat him to becoming the first human to visit the cosmos. These two heroes of the space race had much in common, but one of the most important things was what they were both wearing – spacesuits.

With no atmosphere to protect them, astronauts need these meticulously engineered suits to protect them from the unforgiving vacuum of space. They must provide oxygen, filter carbon dioxide and support the proper pressure that the body needs to breathe. On top of this, extreme temperatures that range from punishing cold in shade to searing heat in sunlight jostle with harsh radiation as the most potent dangers.

Designing a spacesuit to withstand this environment means it essentially has to act as a miniature one-person spacecraft. Even those who are remaining firmly inside one already, like Shepard did, still need some form of protection in case of hull breach or mechanical failure. A spacecraft may be cramped, but there is no room for complacency – least of all when a crew is so far from any hope of rescue if something goes wrong.

Shepard made his flight in the instantly recognisable silver Mercury spacesuit. Based on high-altitude flight suits worn by US Navy pilots, his suit was designed to protect against a sudden pressure loss during his 15-minute suborbital flight. It performed well, as did the others like it used by his fellow Mercury astronauts who followed him up in later missions.

However, it was not built to last. Today, it is part of a major conservation project at the Smithsonian’s National Air and Space Museum in Washington, D.C. The use of synthetic materials in its construction is particularly problematic, as Dr Cathleen Lewis, curator of International Space Programs and Spacesuits, tells Cloud: “They break apart, they become brittle and they degrade. And, when you have a combination of synthetic materials, they interact badly. We’re trying to find the best ways to stabilise those materials and even reverse the ageing process.”

While the rubber seal around the neck of the suit has fared particularly badly over the decades, its distinctive silver sheen is also a challenge. The team is currently trying to pinpoint the origins of the silver coating and why it’s fading in order to preserve the historic garment for future generations.

The Smithsonian’s Digitization Program Office is also scanning the suit and capturing ultra-high-resolution imagery that will create a digital record and spark more ideas on how to preserve it.

The Mercury missions were followed by the Gemini missions, which were the first to see American astronauts making the giant leap outside of the capsule for NASA’s first spacewalk in 1965. These practical experiments, conducted in Earth orbit, provided crucial experience that helped the later Apollo programme and the moon landings.

NASA learned a lot from the Apollo spacesuits too. They came to appreciate the importance of dealing with moon dust – jagged, electrostatically charged particles that stick to everything, scratch lenses and clog mechanisms. Most of all, they learned about the realities of living and working in spacesuits.

“One great concern is the prevalence of overuse injuries among astronauts,” explains Lewis. “Astronauts have a very high rate of shoulder and elbow injuries, so they’re looking at ways to design spacesuits with less pressure on the joints”.

“There’s a balance between protection and mobility. You could make a spacesuit that perfectly protects an astronaut from the elements of solar radiation, the lack of atmosphere, extreme temperatures and moon dust particles, but it’s no good if the astronauts are not able to move and explore."

All of this experience will be crucial when humanity returns to the moon. In 2019, NASA unveiled its next-generation spacesuit – the Exploration Extravehicular Mobility Unit (xEMU) – which will be used for the Artemis missions. These will see humanity return to the moon by 2024 at the earliest, with the first woman and the first person of colour taking historic steps on the lunar surface.

The xEMU has been designed so that it can easily be reconfigured for different uses, whether that’s a spacewalk around the International Space Station or even walking on the surface of another world. New joint bearings will allow for more hip rotation and bending at the knee, while there will be a new system for removing carbon dioxide to replace the lithium hydroxide scrubbers that were first used in the 1960s and the famous ‘snoopy cap’ headsets will also be replaced by a new communications system.

Most of all, they will combine decades of hard-won experience at tackling one of the most daunting challenges that humanity has ever faced. Whatever comes next, the evolution of the spacesuit over the last six decades is what will help us to further explore the moon and beyond.