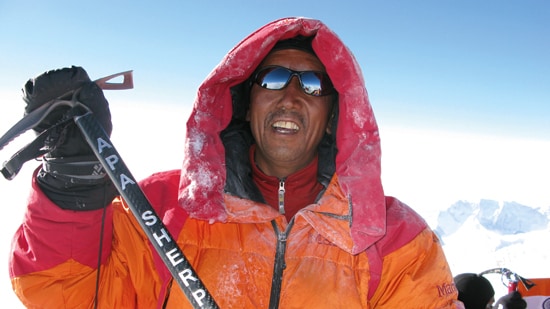 King of the mountain

Apa Sherpa agrees there are many beautiful mountains in Utah, but they’re all a bit small. The Nepalese former expedition guide and current campaigner, now a Salt Lake City resident, tells Cloud: “What I miss are those mountains that are really big, that really make you feel small. Being able to stand on one of those kinds of peaks makes you feel proud. It gives you a sense of accomplishment.”

Apa Sherpa, born Lhakpa Tenzing Sherpa, hails from a region with very big mountains. He grew up in the shadows of the Himalayas, overlooked by Mount Everest. It’s a mountain he has climbed a staggering 21 times, a world record he held until recently, when a younger, still active Nepalese guide climbed it one more time. It’s a feat that saw Apa dubbed ‘the super Sherpa’ ‒ Sherpa being the name for people from the Himalayas living on the borders of Nepal and Tibet.

“Having a record was great, but it’s not necessary for a good life,” says Apa, 61, who now runs a foundation that takes his name, marvelling from a safe distance at the record number of people now attempting to climb Everest. In 2019, mountaineer Nirmal Purja’s photo of a queue of climbers waiting to make the final stage of the ascent became a sensation. “Now it seems as though everybody is going up Everest. I didn’t climb to set any records. I just happened to do so while doing my job to support my family.”

As far as he’s concerned, Apa got out of the guiding game at the right time a decade ago – before the crowds came in, before the mountain changed, before the snows started melting and before he got himself killed.

His first summit of Everest was with mountaineers Rob Hall and Peter Hillary ‒ son of Sir Edmund Hillary, the first man to reach the peak, with Sherpa Tenzing Norgay, in 1953. He then went up almost every year from 1990 and he even reached the peak twice in one year. In 1996, one of only two years in which he didn’t climb Everest, an ice fall killed Rob Hall and seven Sherpas. On Apa’s 2006 ascent, two Sherpas he was with died, including his niece’s husband, and their bodies were never recovered. By one count, some 118 Sherpas have died guiding climbers up the mountain since 1921 – climbers who are typically much less experienced and some who are all too dangerously pumped.

“I consider myself very lucky to have been on the mountain so many times and not even had to deal with a bruise,” says Apa. “I feel like I had a special connection with Everest and I don’t recall a time when I thought I wouldn’t make it back home safely myself. But I’ve seen the changes over time there. Where there were huge blocks of ice, there’s now running water. In the past, we had to climb in deep snow. Now, with climate change, the snows are melted and you have to climb on exposed rock. With these kinds of conditions, it’s inevitable more people will die climbing Everest.”

Did other Sherpas feel the same gratitude? Apa is not so sure. Taken for granted as they are, most, he reckons, would rather not climb at all. “Living with the mountains definitely gives you an upper hand as a Sherpa,” he says. “On Everest, everyone climbs as friends. We look out for each other. We work as a team. And yet the fact is that Sherpas take the work because there just aren’t the job opportunities in Nepal. Nor do they have the education that allows them to choose a different career path. So Sherpas do it to provide for their families.”

A Sherpa might earn £10,000 during the 45-day climbing window, which is very good money in Nepal. Apa himself took to portering aged 12, after his own father died, leaving him the family’s main breadwinner. But the work is extremely arduous and potentially fatal, so that’s where Apa’s efforts today come in. His non-profit organisation aims to fund salaries for Nepalese teachers and lunchtime meals for children attending classes. It’s a small step towards giving young Sherpas the choice to not take to the mountains. He’d like to extend his schools programme across the country, but that would take sizeable financial support and, arguably, the active backing of the Nepalese government.

In the meantime, Apa is also working on cleaning up the mountain that has meant so much to him. Remarkably, all those outdoorsy climbers leave behind a load of rubbish. The last Eco Everest Expedition, which he led, came back with more than 600 abandoned oxygen canisters. But, thanks to his efforts and others’, the situation is slowly improving.

“There are no secrets to being a good climber,” Apa concludes. “You have to prepare yourself as much mentally as physically. You have to train hard and gather experience as you go. You have to have patience. You have to know when to keep going and when to turn around. Guiding on Everest is always challenging, with the responsibility to ensure someone else’s safety as well as your own, all amid harsh conditions. But there’s only one reason people keep coming back to this mountain, why everybody wants to climb it. Because it’s the highest. That’s all.”