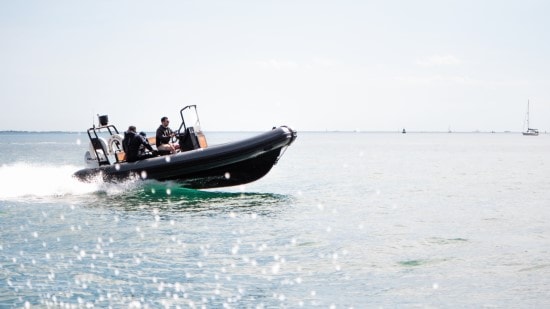 With the right tutelage, the seven seas need not be as intimidating as they look. Cloud editor James Day set about taking a powerboat course…

THE TIDE IS HIGH

With the right tutelage, the seven seas need not be as intimidating as they look. Cloud editor James Day set about taking a powerboat course…

There’s a scene from James Bond’s outing in Spectre where Daniel Craig glides effortlessly down the River Thames and through the heart of London, alerting thousands to the secret location of MI6’s headquarters before blowing up a helicopter over a built-up area. Honda’s Marine division won’t condone either act, but they certainly believe gaining a powerboat licence, learning to navigate your way on the water the old-fashioned way and skippering your own vessel is an absolutely achievable reality for city boys and girls in just three short days.

I’ve been invited to take on the might of the Solent, a stretch of water that’s able to accommodate the world’s biggest vessels and a few nautical miles from the busy international shipping lanes of the English Channel. What could possibly go wrong? No sinkings and no scurvy sounds like the recipe for a successful day’s sailing so, while the laws around actually requiring a licence could be considered questionable, avoiding icebergs is preferable. That’s why I’ve employed the services of the appropriately named Urban Truant training school at Swanwick Marina in Hampshire.

The Royal Yacht Association Powerboat Level 2 course is combined with a VHF Radio Short-Range Certificate exam. Crucial for understanding the air waves and not just tidal ones, it requires around 10 hours of hard revision before sitting an exam if you want to call yourself captain. That includes learning how to raise distress signals, knowing which channels to monitor and which to broadcast on, and mastering the nautical phonetic language – charlie-romeo-uniform-mike-bravo-sierra, as they say.

What shall we do with a newbie sailor?

But let’s not lose sight of the end goal here – becoming James Bond – so it’s reassuring to discover that a salty dog of an ex-Royal Marine called ‘Paul’, who is used to engaging in pirate gun battles in the Pacific, would be one of the instructors helping me to accrue the necessary theoretical and practical skills to take a boat out to sea, make all the necessary high-speed manoeuvres and hopefully return home safely.

Before being allowed to whoosh through the wash and bother ferries on Urban Truant’s Honda-powered Highfield Patrol 660 RIBs – reminiscent of Bond’s boat in Spectre and armed with state-of-the-art Garmin navigation equipment – the instructors take safety seriously and we’re soon soaking up an immense amount of knowledge, from what each colour-coded buoy represents to how to navigate using plotters and charts and understanding the shipping forecast and tide times. It’s not long, however, before we’re out on the open water and approaching 30 knots.

Heading out to sea from the River Hamble is, in reality, nowhere near as scary as I’d imagined even with admittedly huge cargo ships on the horizon. Sticking to a strictly enforced initial six knots is excruciating because, as soon as you release the throttle and hurtle towards what one might consider breakneck speeds, you’re immediately filled with the confidence that much of the theory has stuck. Aside from learning how to use the tide and wind direction to your advantage, slow-speed moves to scoop up a ‘man overboard’ and feathering the trim and tilt of the engine when changing speeds, I’m sure it shouldn’t feel this easy.

The final day is where Urban Truant lets you reasonably loose to showcase everything you’ve learned. This might include heading to Cowes on the Isle of Wight to catch up with the sailing set for fish and chips, perhaps popping to a waterside pub in Beaulieu or playfully bouncing off the wash of far bigger and more imposing vessels. It culminates, if you’ve done everything right, in being handed a bona fide Powerboat Level 2 Handling licence and VHF Radio Short-Range Certificate.

Captain of your own ship

Given that courses are a drop in the ocean at less than £500, the idea of buying your own boat to celebrate becomes immensely attractive and Honda partners with boat builders like Highfield, Maxima and Ranieri to make all-in-one-packages less intimidating for those still finding their sea legs. Landlubbers in front of a laptop may wish to consider Fairline Yachts, who have created an ‘industry first’ luxury online boat configurator.

Inspired by the likes of Tesla and Ducati, the F//LINE 33 website allows users to design their own award-winning superboat to new levels of sophistication and create their own individually customised craft. Once content, simply submit your design to a preferred dealer from the brand’s global network and it’ll be put into production. So, naturally, I gave it a go.

Following a simple six-stage journey, from choosing the exterior colour and engine options to selecting upgrades, accessories and even the language in which you’d like the owner’s manual, spending ludicrous amounts of money is all too easy (even from your mobile phone, if you prefer). As each step is completed, your personalised F//LINE is built right before your eyes as your personal touches are added. The retail price is updated with each change, offering complete transparency.

Miles Moorhouse, Head of Marketing at Fairline Yachts, tells Cloud: “With the ecommerce market forecast to hit $6.5 trillion by 2023, it was important our digital portfolio met the needs and demands of the online shopper. Ordering a new car online is commonplace and we’ve obviously seen a sharp increase in online customer interactions – even selling new boats from our online video tours.”

And there you have it. Sounds almost as easy as skippering a powerboat on the Solent.