This Easter, the Miami office hopped into action to arrange a special one off helicopter charter.https://aircharterservice-globalcontent-live.cphostaccess.com/images/global/news/31594_easter_egg_drop_tcm87-40312.jpg 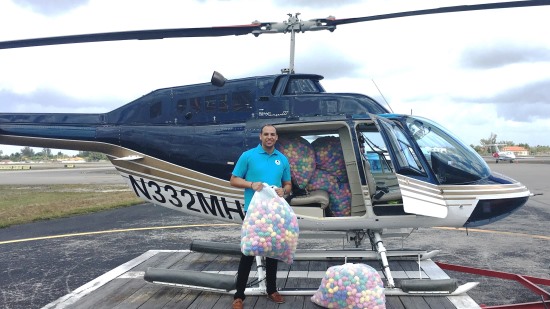 Air Charter Service’s Miami office received a phone call earlier this month asking for a helicopter to drop around 20,000 plastic Easter eggs over a field for an eager crowd of more than 2,000 people armed with baskets to collect them.

The call came from Vous Church in Miami and was to be the highlight of their Easter Saturday celebrations. Around 2,500 gathered in the sports field of Jose De Diego Middle School in Wynwood for the event, including a few local celebrities, such as Miss Miami.

The church, which opened in 2014, is run by its ‘hipster pastor’, Rich Wilkerson Jr, who officiated at the wedding of Kim Kardashian and Kanye West in Florence, Italy three years ago and has his own reality TV show, ‘Rich In Faith’.

Joel Fenn, Managing Director of ACS’s Miami office, said: “At first we were a little dubious as to whether it was allowed by the Federal Aviation Administration (FAA) to drop objects out of the back of an aircraft but, after carefully studying the FAA’s Code of Federal Regulations we found that it was fine, so long as it posed no threat to public safety. Then we set about finding a suitable helicopter and sourced a local operator with a Bell 206 Jetranger, who was more than happy to perform the task. Some of our team attended the event to make sure everything went smoothly and that a great day was had by all.”