LOVE IS IN THE AIR FOR THE PRIVATE JET-SET

Air Charter Service reveals some of the most romantic gestures that have taken place on board their flights.https://aircharterservice-globalcontent-live.cphostaccess.com/images/global/news/231347_vday_tcm87-39433.jpg 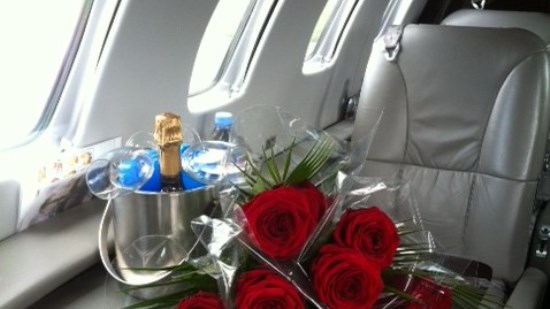 As a prelude to Valentine’s Day next week, leading private jet company, Air Charter Service, reveals some of the most romantic gestures that have taken place on board their flights.

Andy Christie, Group Director of Private Jets at ACS, reveals: “We have had various marriage proposals on board our flights, including one last year on Valentine’s Day. A client in India whisked his girlfriend up in a helicopter last February 14th and popped the question whilst they took in stunning views of the Mumbai coastline. We arranged flowers, champagne and red velvet cupcakes with the lucky lady’s name on them.

“In 2015 our New York office arranged a small aircraft to take off just before midnight from Farmingdale, Long Island. We helped the client to decorate the private terminal at the airport with flowers and gifts. When the couple were airborne, he proposed at the stroke of midnight – the anniversary of when they first met. Unsurprisingly, she said yes!”

Christie continues: “It’s not just marriage proposals that people call us for. Two years ago on February 14th, a romantic high-profile Premier League footballer, took his then-girlfriend (now fiancée) by helicopter to an exclusive restaurant for a Valentine’s Day date.

“Even one of our private jets specialists here at ACS got in on the act – he took his girlfriend on a Legacy 600 aircraft flying from Zurich to Paris and popped the question at 35,000 feet! They got married in July last year!”

“Let’s hope there are some more lucky couples this year – a flight on a private jet or helicopter seems to impress loved ones and guarantee the answer you’re looking for!”